Welcome to my blog!  I’m Mary Maupin, a painter who works in oil and/or acrylic on canvas.  I’m inspired by the landscape around me and the colors in my mind, as you can see from my paintings. I will be posting images of my paintings and collages here. For more information about my work or to commission a piece, see “Contact & Pricing Info.” above.

You can follow my blog (this means you will get an e-mail notifying you when I post a new painting or collage) by entering your e-mail address in the column on the right.  You will then get an e-mail asking you to confirm that you do want to follow my blog.  Thank you.

I hope you enjoy this blog!  I welcome your comments.

Quilt for my nephew’s wedding present. Queen-size, made from scraps left from other projects.

Collage of mirrors and pieces of glass, made for a friend who hangs mirrors in her woods.

What We’ve Been Through 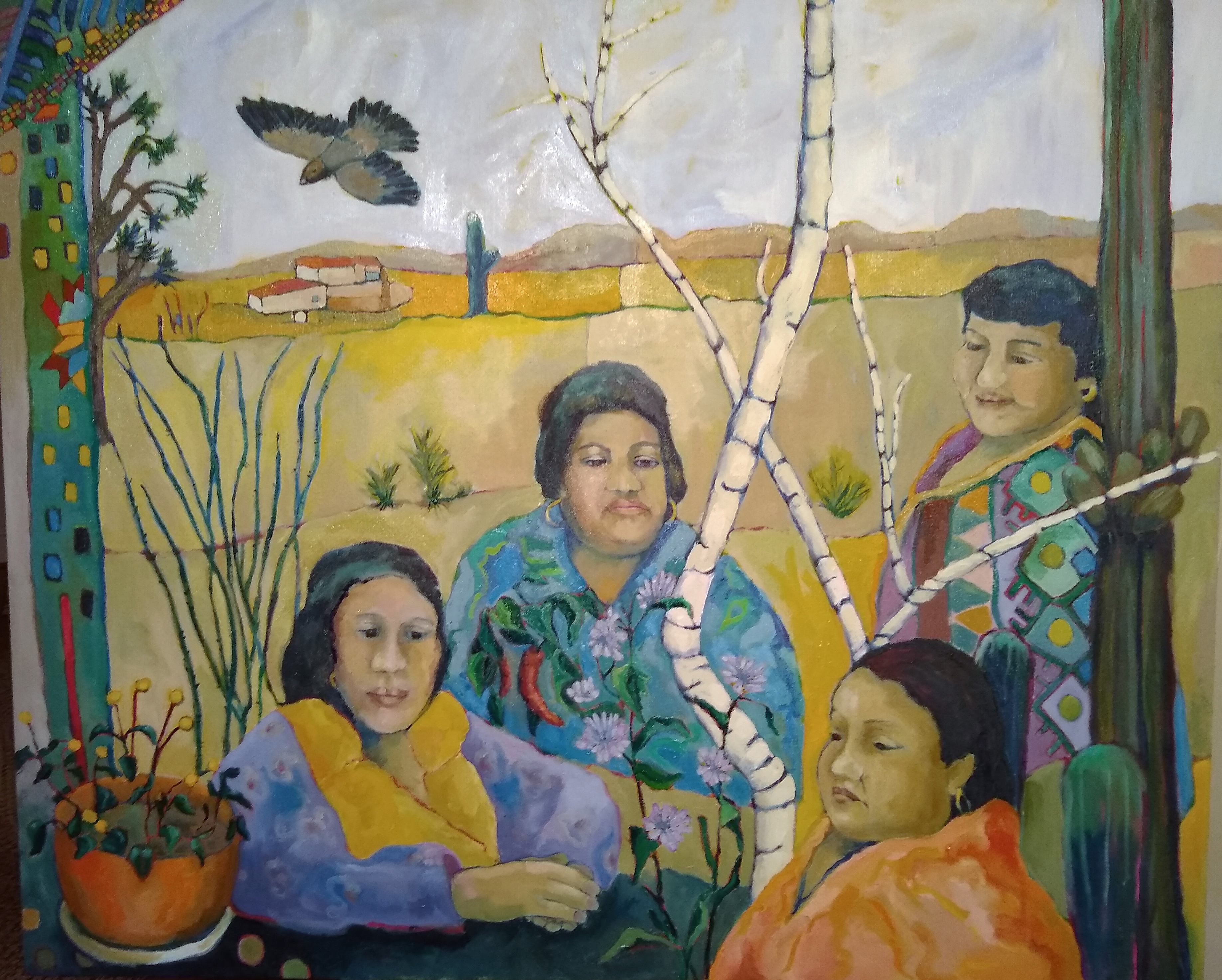 I’m having a really hard time painting in the current atmosphere of my country, the very real potential demise of our democracy. I’m filled with despair, trying to ward off despair. I subscribe to Heather Cox Richardson’s thoughtful blog, Letters from an American. The following is what she posted yesterday: (underline in last sentence is mine)

“So here’s my two cents. This is not normal political behavior. This is not normal partisanship. While, as you must know by now, I believe that the future always remains unwritten and we can always change the outcome until it is, the steps Trump takes are consistent with the rise of a dictator. And now with him freed from the cloud of impeachment, we appear to be entering a new phase of escalation. It looks like he is beginning to single out his opponents for punishment, justifying it with the argument that those opponents are hurting America.

While it is not time to panic, it is definitely time to keep up pressure on your senators and representatives, to take up oxygen defending the rule of law, to demand hand-marked paper ballots in the 2020 election, and to work for candidates of your choice not only for the presidency but also for the House and Senate, candidates who will defend our democracy. And if you find it all too much to face, remember that refusing to let this administration throw you off track and instead going about your day is an act of resistance. And so, in this era, is simply being kind and honest, when so many people are trading on hatred and lies.” 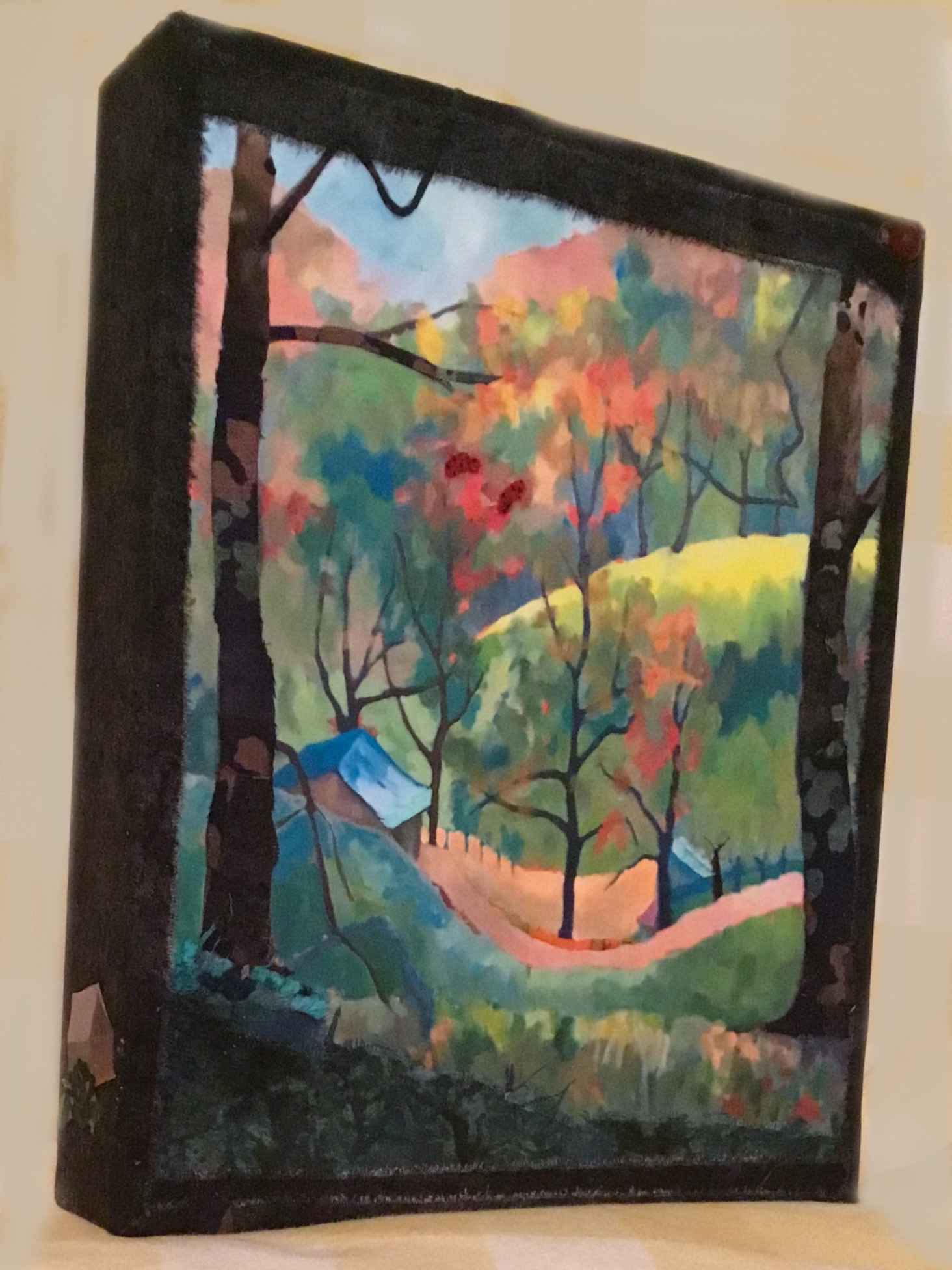 Recently finished collage on back of box, 9″ x 11″ x 2″. Bits of fabric are glued onto a print of my much larger oil painting

A friend had this table made and asked me to design and paint it. It now lives on Cape Cod. 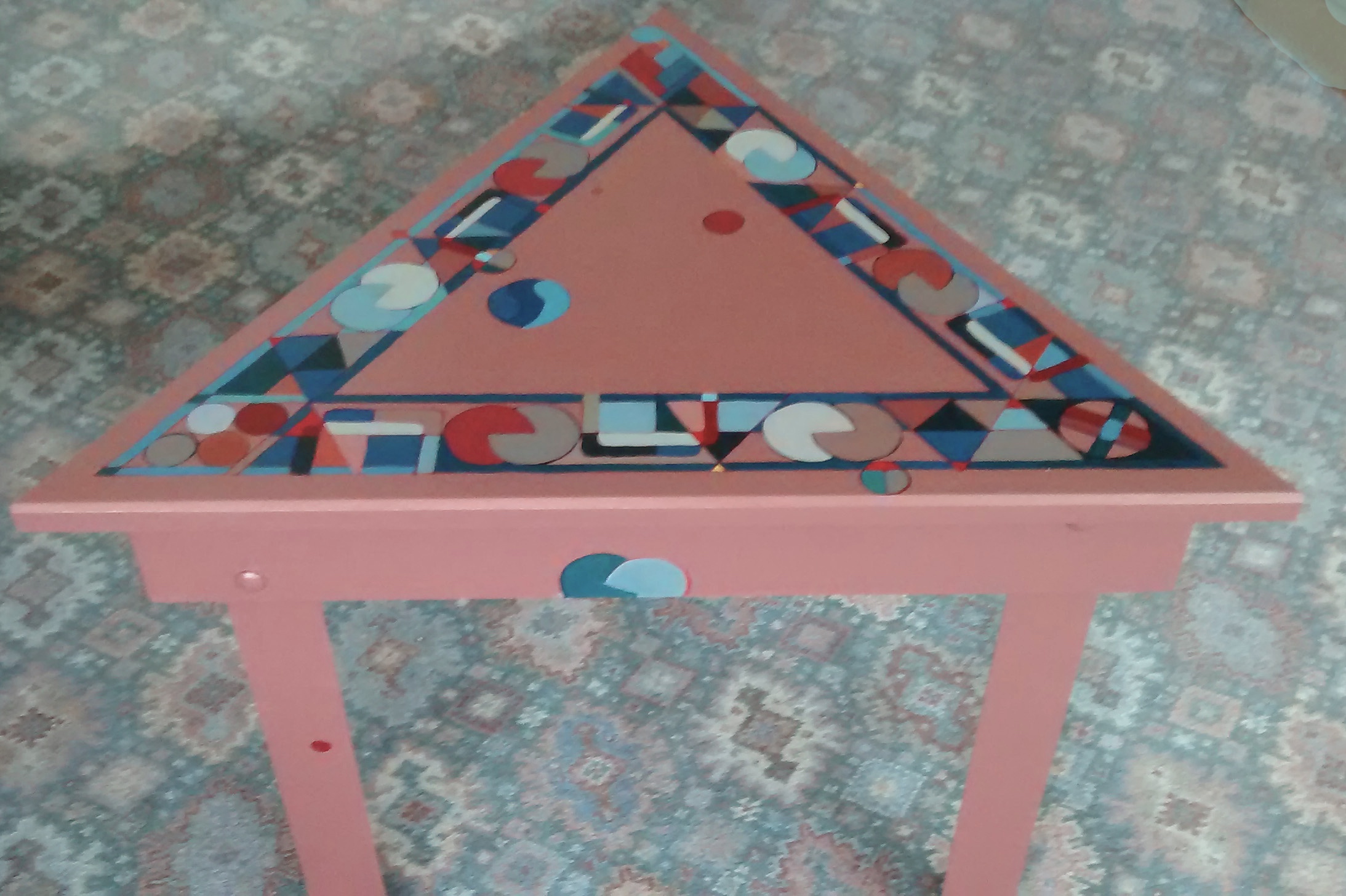 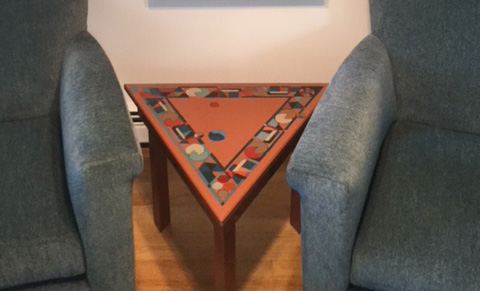 Here it is in its new home.

Landscape for a couple on a new path… 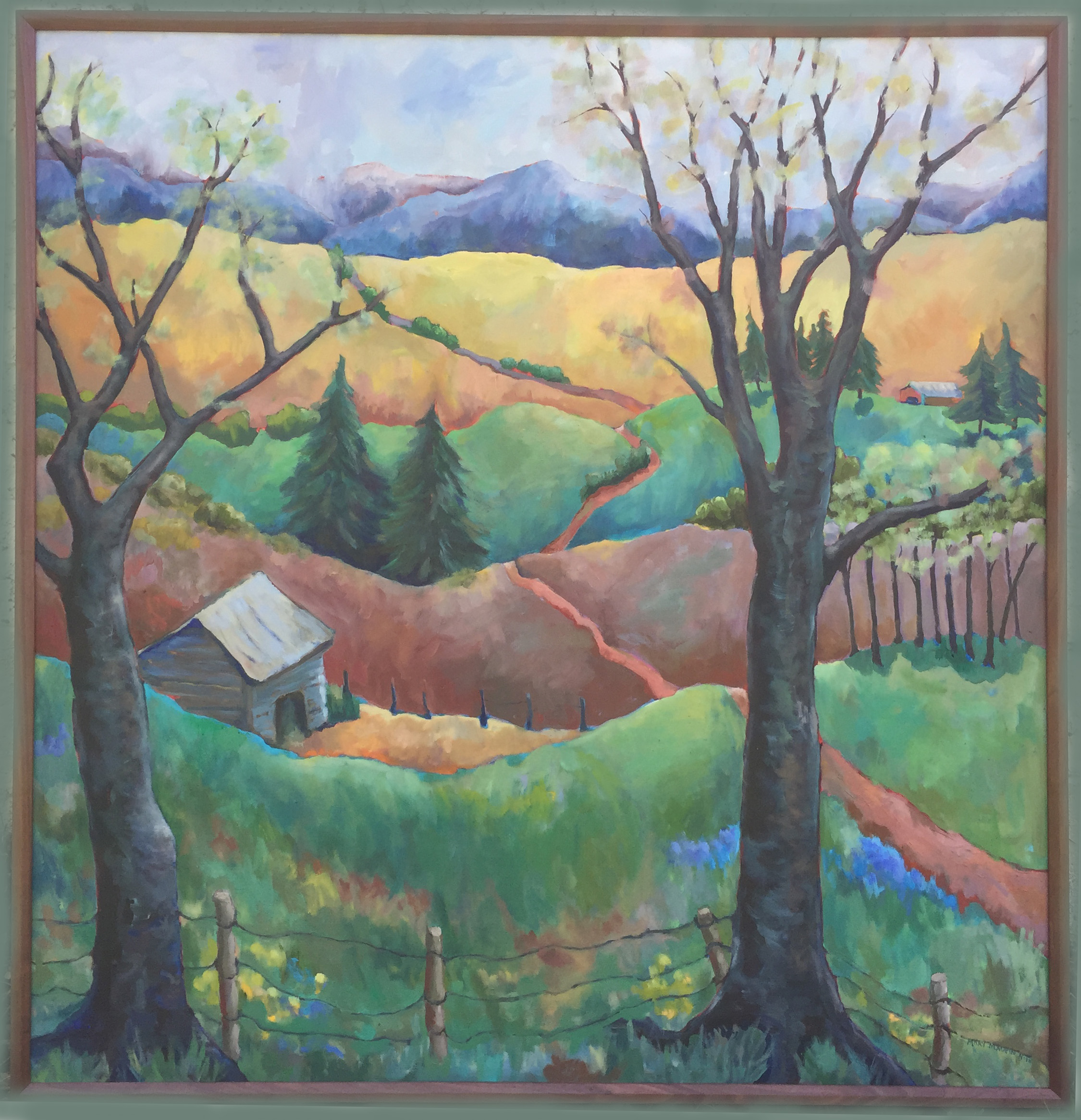 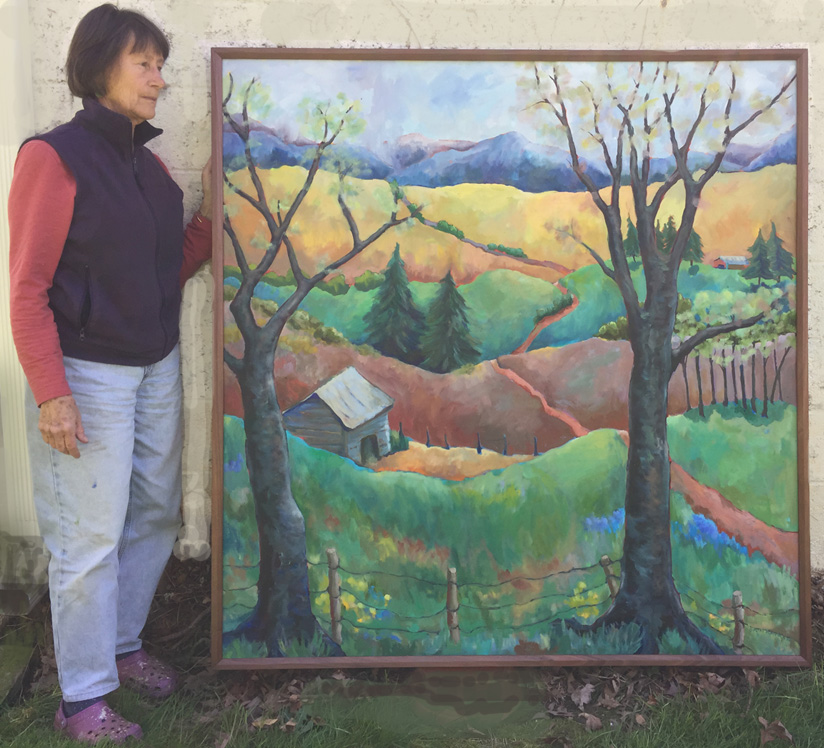 DEPARTURE FROM MY USUAL POSTS–but necessary!

If you need to unfollow me because of this post, so be it.  This will be the only non-art entry I will post on my blog, and I’m doing so because I simply cannot sit by quietly and let whatever happens happen.  You shouldn’t either.  Add: for some reason, WordPress has closed comments on this post.  Feel free to repost this post!

Charles Blow of the New York Times reminds his readers that the election of Donald Trump is far from normal.      The durability of our democracy is not destined. It is not impervious to …

Source: Charles Blow: The Catastrophe that is Donald Trump